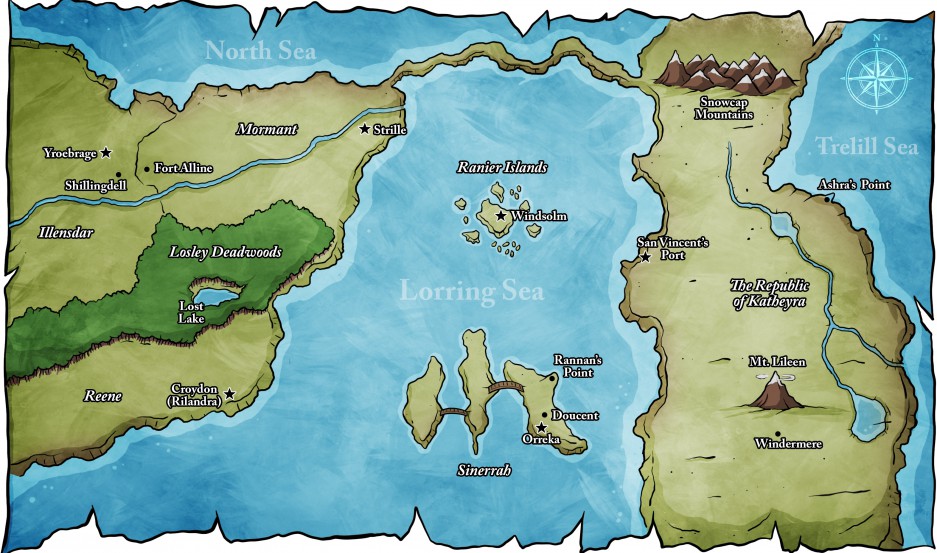 Standing in a clearing on the Illensdar side of the border, Shianne absentmindedly rubbed the cuff around her wrist. It wasn’t too snug. It didn’t itch or burn. But it was an ever-present reminder that she was only a couple of weeks away from losing her paw forever, unless she could figure a way around its magic.

Though very near the Mormant border, she was not concerned, knowing the Wolves feared nothing as much as they feared the Losley Deadwoods. The breeze ruffled the coppery fur of her face and as she started to make her way towards the forest’s edge. The feeling of the air thickening around her that always came with breaching the Losley Deadwoods borders, and the hazy fog that amassed between the trees, made her feel as if she were walking into a vat of taffy. END_OF_DOCUMENT_TOKEN_TO_BE_REPLACED

He had been sitting in an uncomfortably small wooden chair for quite some time while Serina flitted around her work room, pulling books and sheaves of paper from drawers and cabinets. She muttered to herself as she read a sentence or two from one book, and then consulted a chart, and then came back to the book again. Finally, he groaned loudly to get her attention,

“Annalose and Ardra, Serina! If you weren’t ready for me, I could have been doing something – anything else until you were.” William complained. Serina looked up at him, a cross look on her face faded away and was replaced by one of curiosity.

“Annalose and Ardra?” she said, “What in the Creator’s name is that?” William’s eyebrows shot up. He hadn’t considered that these Felines, separated from his own land, would have gods and religions all their own. And his religious epithets would have no bearing here. END_OF_DOCUMENT_TOKEN_TO_BE_REPLACED

William slammed his fist down on the small table in the library, causing the book he had been reading to jump up into the air. He snarled and slammed the tome shut, shoving it aside to rest with the other books that had provided no answers. He had been unsuccessful in trying to find information about the oath that had been made with the Dragons. He needed to know the contents of the oath, and how the binding magic worked. What was this barrier? What was it made of, how did it function? He needed to know all these things before he could even try to figure out a way to break it. And reading endless books about ancient magics was leading him no closer to the answers.

Much rested on his shoulders and figuring out how to break the barrier was highest on the list from nearly everyone’s perspective. Though personally, he ached to get in touch with his homelands – not just because he yearned to know of the well-being of his family, but because he needed to get word to Sinnerah’s leaders to see if they would stand with them against the Wolves. It was obvious that the Mice would stand against their most hated enemy, but the Bears had a long professional relationship with the Wolves. Much of their trade was dependent on that relationship with Mormant. END_OF_DOCUMENT_TOKEN_TO_BE_REPLACED

The following morning, after another fitful night of sleep, Beddigan found himself lingering outside of the throne room with Ragnon at his side. They had been given breakfast in their rooms by another silent female Ram, who did little more than drop off the food trays, nod, and pick them up a bit later. Shortly after she had left with the refuse from breakfast, a pair of guards came to retrieve them for their fore-mentioned meeting with the King.

They had been waiting outside the throne room doors for quite some time when the guards finally opened the heavy doors and let them into the dimly lit, acrid-smelling room. This time, on the raised dais sat the King, and to his left sat the old Ram, Ollin. The chair to right sat empty. END_OF_DOCUMENT_TOKEN_TO_BE_REPLACED

Beddigan stood at the bow railing of the ship and smiled at the salty spray of the sea tickling his whiskers. He had never liked sea travel; didn’t have the stomach for it. But this voyage, from the Empire of the Lions to the country of Ehl-Indrah, on the far side of the Bintack Oceania, the Rams domain, was unlike any sea travel he had experienced before. The small ship cut through the water with superior grace, making for a much more even ride, with nearly none of the choppiness usually felt as a boat battled with the waves of the water below.

After a long trip by carraige from the Capital which sat far inland in the allied lands, he and Ragnon had reached the coastal city of Utinnah and left the Empire aboard one of the fleet’s specialty transport vessels, manned without traditional captain, and powered by a combination of wind and Mage. It moved much more quickly than a traditional ship, and had the added benefit of a more smooth and stable ride. These ships were reserved for diplomatic missions, with regular tall ships serving for general trade and transport. Mages were in short supply in the Empire, so only few were trained in the arts of navigating these vessels through the ocean. END_OF_DOCUMENT_TOKEN_TO_BE_REPLACED

Shianne awoke with a start, sending herself careening over the side of the narrow cot she had been given to sleep on in her makeshift cell. She landed with none of her usual grace, but instead in a heap on the cold, hard-packed dirt floor with a bone-jarring thud. She snarled and pushed herself up into a sitting position, groaning at what would surely become more bruised muscles by morning.

It was dark, and aside from the rhythmic breathing of the other two prisoners, each in their own little cubicle made of wood and irons bars, all was quiet. Night still then, she thought, rubbing her paws over her face in an effort to scrub away the weariness. It had been several days since she had been drug down the stairs into the cellar below the Inn, where Commander Rollstad had set up his makeshift prison. She had been relieved to find that he hadn’t killed the councilmen and councilwoman that had been abducted, but disappointed to find that former Council Elder Elgress was not among those captured. There was a slight chance that the Former Council Elder still remained free and had taken off somewhere on his own, but it seemed most likely that he had simply been killed because of his influence in Katheyra. To Shianne’s cynical mind, it made sense that the Wolves had had the elderly Badger removed from his rooms in the Council House and secluded somewhere off-site, to make the Badger’s assassination easier. After all, it was difficult to murder someone in a governing office. She should know having done that job more than once. END_OF_DOCUMENT_TOKEN_TO_BE_REPLACED

Shianne leaned back against the damp, exterior wall of the Council House, with a deep sigh. It had been a long, drizzly night and her patience was wearing thin. It had taken a great deal of persuasion on her part to get Councilman Lerke to agree to play his part in this ruse. Not that it surprised her at all that the Badger had needed convincing. It was never easy to get someone to put their life on the line, even if it was for the greater good of the whole of Katheyra.

She had sat with the Badgers and talked late into the night, the day she had approached them in the Council House after the quarterly public forum; just moments after Councilman Björn had officially become the Council Elder. Their distaste for their new leader had been her foot in the door to figure out what was really happening on the Katheyran Council, that would allow a tradition of steadfastly refusing any advances the Wolves made into their land could so easily be broken. END_OF_DOCUMENT_TOKEN_TO_BE_REPLACED

Beddigan awoke with a start when his Page knocked on the door to his room the next morning. He had slept fitfully, his brain overloaded with all of the new information that he had learned from the Lord Regent of the Empire of Lions.

“Come!” he called, and the Page entered, bringing with him a steaming bowl of washing water and towels. The young Tiger bowed stiffly and said,

“Breakfast is nearly ready, my Lord.” Beddigan nodded and waited for the boy to leave before he jumped out of bed and stripped off his night clothes to give himself a hasty, but thorough wash. The palace was chilly in the mornings and the hot water felt wonderful against his fur. He dressed quickly and made his way down the corridors to the dining room. This time he was the last to arrive, save the Lord Regent. Much smaller fires burned in the room, and the casement windows were unshuttered, letting the morning sunlight stream in. William nodded to him, looking well-rested and Ragnon lounged in his chair looking ill. Beddigan grinned at the Wolf, END_OF_DOCUMENT_TOKEN_TO_BE_REPLACED

Funny Blogs With A Hint Of Personal Development